Simple endless loop strings are relatively easy to make. In some occasions you may want to consider reinforcing the loops as described here.

If you want to make endless loop strings you need a string-making jig. If you want to keep it simple, you can simply take a board and drive two strong nails to it. The distance of the nails needs to be equal to the length of the finished string plus some extra (5-10mm) for the loss of length caused by twisting. You can also make really fancy adjustable jig like me (see pictures below). Many endless loop string makers seem to prefer a different kind of jig where there are four pegs around which the string is wrapped. This kind of jig is described in detail here, but is suitable for making non-reinforced endless loop strings.

Both Baker (2000c: 218-221) and Payne-Gallway (1990: 111) tell that endless loop strings should not be twisted. This is because in a twisted string the outer threads are under more strain than inner threads as they have to travel a longer path from end to end (Baker 2000c: 192). However, the severity of strain on the outer fibers depends on the thickness of string and the number of twists. The stretchiness of the string material probably affects the maximum safe number of twists you can make. With a large number of twists the outer fibers might break before they've stretched enough for the inner fibers to take their share of load. However, the reality might be more complex than this. In any case, according to Baker (2000c: 213) Dacron and silk stretch 4%, linen 2% and FastFlight 1,5% before breaking.

Most strings should be waxed. With synthetic fibers such as Dacron you should probably use synthetic bowstring waxes. With natural fibers such as linen beeswax is probably a better option. It's not often explained why waxing is required, but apparently it serves at least two purposes:

You should apply the wax to the skein before winding the servings. Otherwise the areas beneath the servings remain unwaxed. Also note that some fibers such as Dynema do not require waxing - at least according to their manufacturers. Some bowstring material such as Dacron B-50 are usually prewaxed with a synthetic wax.

First secure the thread to one end of the jig. 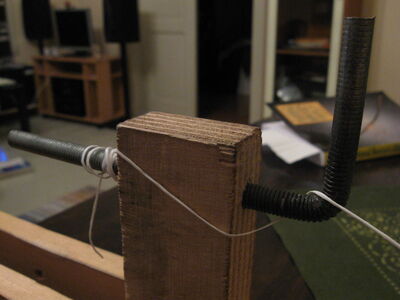 Next wind the thread around the two posts of the jig, making sure each loop is of equal tightness. Loops should not be tight like violin strings but not noticeably slack either. Also make sure to press the loops tightly against each other at the end, not leaving any space between the threads. Continue winding until desired number of threads is reached.

When I make relatively thick strings (20+ loops) I usually wind half of the threads upwards and then wind the rest downwards over the previous loops. This makes the skein easier to manage, although should not provide any other benefits in simple endless loop strings. In reinforced loop strings this step is more important as the upper and lower threads are tighter at the loops. Making the whole skein lower mitigates this problem, allowing more even load across each individual thread. If you choose to wind the skein in layers, marking the first layer of threads with a pencil makes it easier to wind the second layer evenly. You can see an example of this in the below picture. 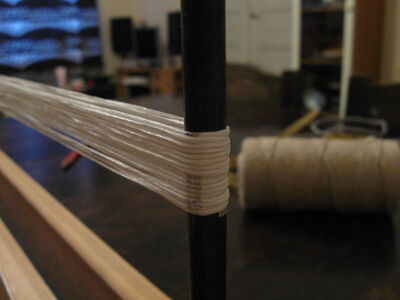 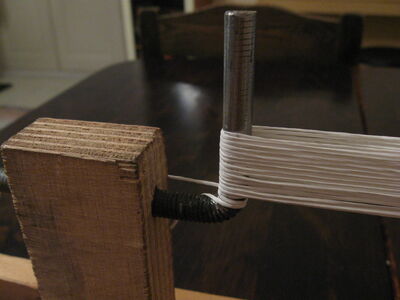 Once you've wound enough loops attach the loose ends together. The method of attachment varies from source to source. Some sources suggest simply twisting the ends together and letting the serving hold them together. I had trouble using this technique with Dynema, although it seems to work with well-waxed, sticky thread like pre-waxed Dacron B-50. Some suggest tying the ends together, preferably with a blood knot used to tie fishing lines together. The problem with using a blood knot is getting the final loop to the same tightness as the others. There are other knots that might be more useful. For these reasons I usually simply tie the ends together with a simple double knot which is easy to tighten to correct tension (see below). 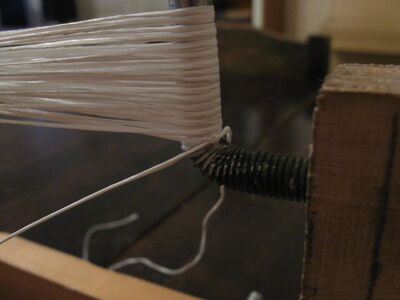 Next step is to serve the loops, which are at this point at the middle of the skein. First mark the area you're going to serve with a pencil as shown below. Then wind serving tightly around the whole area. Take special care in winding each round tightly against the previous one. If you fail to do this properly, the loops in the serving will come apart in use, exposing the threads. Once you've finished the first loop, continue with the second one.

There's one annoyance in winding the servings: how to fasten the ends of thread used as serving together? I've tried various methods and even the least successful methods work ok with a little help from Superglue. However, the only foolproof method I've found is to leave the one end of the serving thread under the serving and finally tie the ends together. To get a better idea how this works look below. This method keeps the serving securely in place. There is one caveat, though: the extra thread left under the serving makes the cross-section of the string a little asymmetrical. This is not a problem if you use thin thread for serving, but can cause problems with very thick thread or if the skein itself is very thin.

Another type of foolproof serving is described by Baker (2000c: 227-230). However, this type of serving probably works best with Flemish strings. 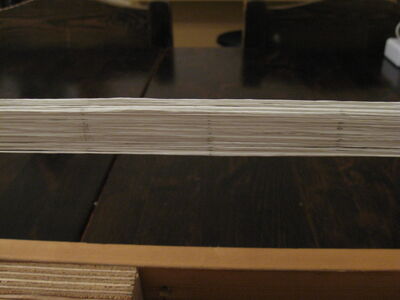 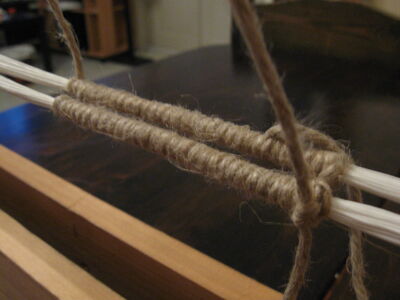 When the loop servings have been finished, carefully remove the string from the pegs, twist the string a few times if you wish and place it again to the jig so that the served parts are against the pegs as in below picture. If you twisted the string, you may need to move the pegs a little closer to each others. 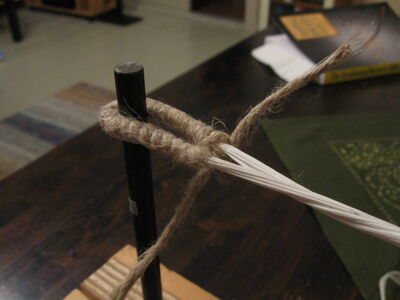 Next start serving the middle. If you're making a string for a crossbow, make sure the middle serving is noticeably wider than the stock of the crossbow. 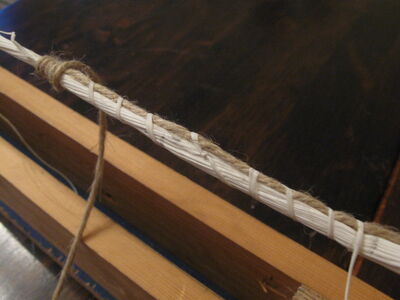 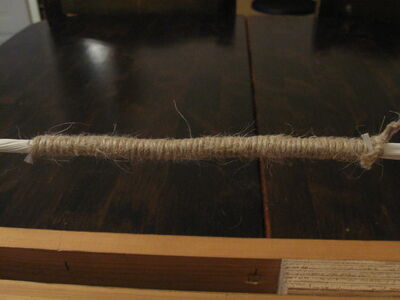 Next you can serve the roots of the loops together if you like as in below picture. 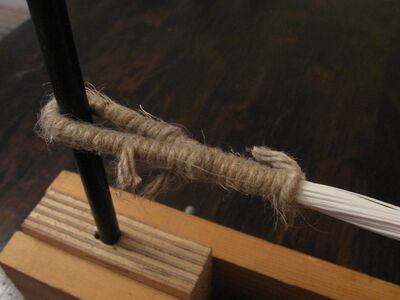 Finally you should trim all loose thread ends. If you want, you can add additional leather protection to the loops.