Bow irons or bridles were used with crossbows that had steel prods. This means they were relatively late development in the history of the military crossbow, starting to appear during the 15th century (Alm 1998: 34; Payne-Gallway 1990: 103). Well-made bow irons are exceptionally good at keeping the prod in place, but they also allow one to remove, reattach or replace the prod very easily. This is, in my opinion, their main advantage in modern times.

Bow irons consists of several different pieces, which are very well described by Payne-Gallway (1990: 105-107). Making of each of these pieces is covered in a separate article:

A finished set of bow irons is shown below. 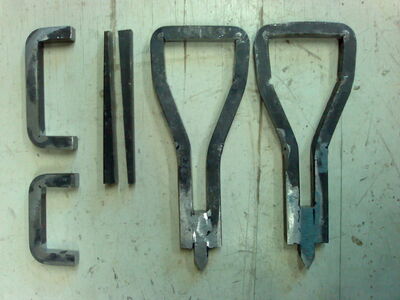