Wippe is an simple wooden lever that can be used to cock a crossbow of moderate strength. It is basically a much simplified version of the goat's foot lever. Unlike goat's foot lever which pulls the string to the nut, wippe pushes it there. A wippe made of wood is also much easier to manufacture than a goat's foot lever, which can only be made by blacksmith. Cocking a ~300 pound crossbow with a wippe is very smooth and easy with a lever that's only 80cm long. Up to a point lengthening the lever allows even stronger crossbows to be cocked. A wippe-operated crossbow is somewhat slower to cock than a crossbow cocked by hand. However, cocking a bow with a wippe is much faster than with a cranequin or a winch.

While making the wippe parts is easy, designing it so that the lever operates just right with a given crossbow is not. Therefore this article puts much emphasis on wippe's operating principles and the issues that may arise during use.

A wippe consists of four parts:

In addition the front end of the crossbow has to have a metal loop, around which the lever's metal hook rotates. The core parts of the wippe are shown in the below pictures: 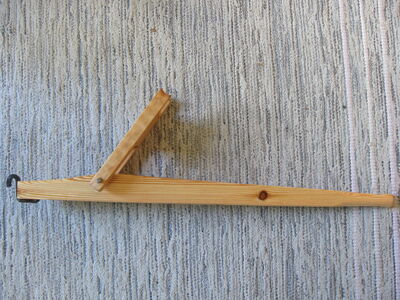 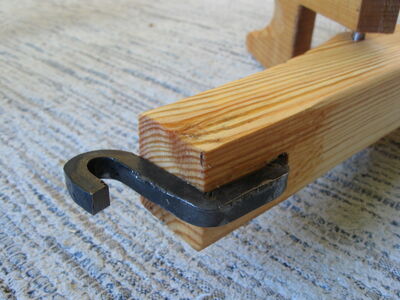 Although the wippe looks deceivingly simple, there are several caveats you may run into while making one. The diagram below shows wippe operation in three distinct phases and illustrates some of these key design principles:

The parts marked with letters are:

When designing a wippe, there are a number of potential caveats that need to be avoided:

Besides these potential caveats, correctly selecting the length of A and B can be tricky. The problem is that there's no simple formula for determining the dimensions of these parts. Probably the easiest way to find out the correct dimensions is to test different lengths using a CAD program or even cardboard templates. The one thing you definitely want to do is maximize the advantage in leverage the wippe provides. There are two factors you can adjust to do this:

Both of these optimizations are intended to allow making C as short as possible, which in turn makes the wippe as light and as manageable as possible.

Retrieved from "https://crossbow.fandom.com/wiki/Making_a_wippe?oldid=4344"
Community content is available under CC-BY-SA unless otherwise noted.