Making a steel prod from a leaf spring

This article explains the process of making a bow from a leaf spring, that's same thickness it's entire length. This method works best on simple pyramid-profile bows, but can be adapted to enhanced pyramid profile bows, too. Various bow design aspects have been discussed in this Wiki article.

These pictures show the basic steps taken in cutting and grinding the steel bow to shape. Although they show an old bow being retapered, the same process applies when making a bow from scratch. 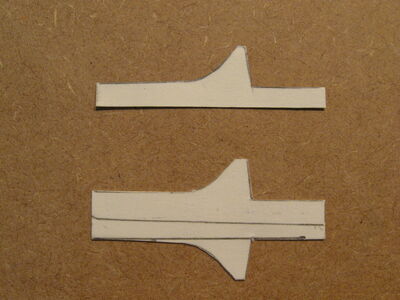 First mark the lines along which you'll cut with a sharp file or similar. You can use a pre-made cardboard model (as in above picture) to help in marking the tips. 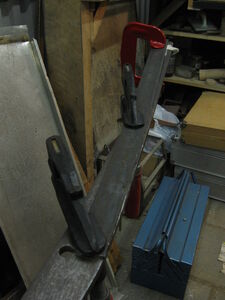 Unless you're a master with the angle grinder, you should definitely attach a straight piece of steel, a guide, along the cut. This piece of steel works not only as a visual guide, but also as a physical barrier against the angle grinder's disc, preventing you from cutting too little or too much by mistake. Make the guide from relatively thick (3mm+) steel to ensure you don't cut through the guide itself by mistake. Never use the same edge of the same guide twice if you can avoid it - the angle grinder wears it out and additional cuts might not be straight. 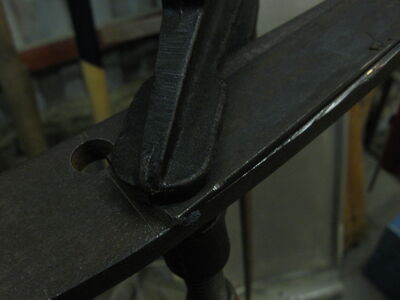 Next take the thinnest abrasive cutting disc you have for your angle grinder and start cutting along the guide. The thinner the disc is, the faster it cuts. Also the bow heats much less with a thin disc. I use discs that are ~1mm thick, even though the "standard" dics are ~2mm thick. Proceed very slowly along the entire length of the cut, moving back and forth constantly. Don't force the disc through the bow - rather grind slowly all along the cut's length and let the disc go through the steel "naturally". Otherwise you'll overheat the cut and/or risk cutting in a wrong angle, possibly ruining the entire bow. If you're paranoid about overheating, you can use a cloth soaked in water and cool the area being cut periodically. I have not found this necessary, though. 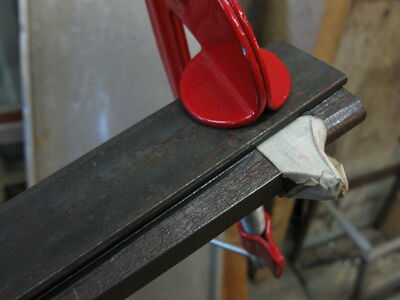 In order to prevent unintended cutting of the tips, you should clearly mark the end of the cut, like in the picture above. Try to cut all the way to the tips while the steel pieces are still attached. This results in good and uniform tip shape. 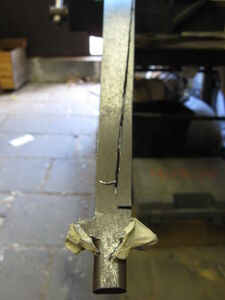 When you're finished with the longitunal cut, cut that side of the tip to a nearly-finished form and as you go remove the thin slice of steel from that side of the bow. Do the same for each four sides.

If you're making an enhanced pyramid profile bow, grind the outermost parts of the limbs to even width. If you're converting an existing simple pyramid-profile bow, use of plywood template is advantageous: 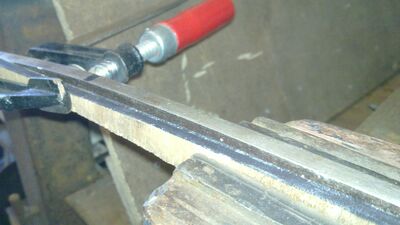 When all sides are ready and the tips are roughly formed, use a bench grinder to form the tips. Make sure you make all edges which touch the string really round or the string will break prematurely. The result should look similar to this: 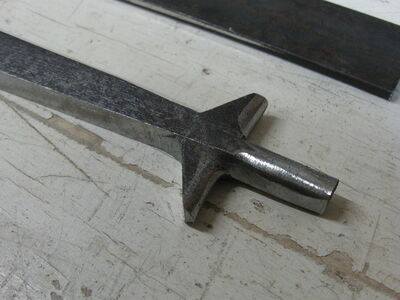 Once the tip shape is formed with a bench grinder, smoothen tips with sharpening stones of varying grit size. Use a rough stone first, moving on to finer grade stones as the work proceeds: 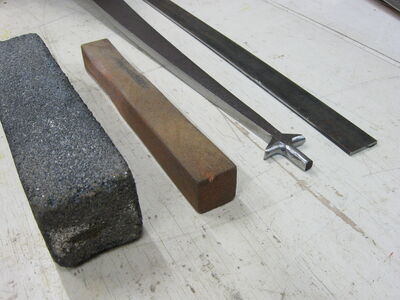 Alternatively, a good-quality metal file can be used. In the end the tip should look similar to this: 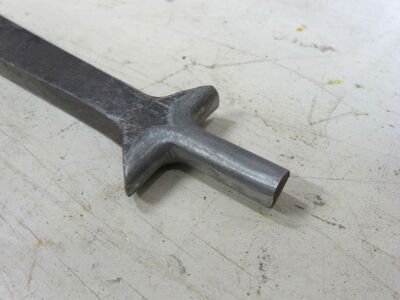 If the bow is made from a leaf spring and it has the characteristic hole in the middle, it's best to reinforce the middle artificially as described here, or the bow will break there even if the draw is kept moderate. Use of strong bow irons coupled and a rigid foot loop is also recommended.