Along with the lever and pin trigger, the thumb lever and string-catch crossbow lock is probably the simplest lock one can make for a crossbow. The basic principle is very simple: When a small lever, attached by a simple axle located immediately behind the string-catch area is pressed down at one end, the other end resize, pushing up the bowstring from its catch, releasing it. Due to the nature of the design, it is somewhat less demanding to construct than even the lever and pin trigger lock.

Historical examples of crossbows with such locks include the archaeological find of an 11th century hunting crossbow at Colletière à Charavines in France, or traditional forms of Inuit hunting crossbows that some Inuit used (possibly as the only Native American cultures to adopt simple crossbows). [1] [2]

Below is a roughly half hour long tutorial video, with the full making process of an early medieval, all-wooden crossbow, explained by experienced British replica crossbow maker Leo "Tod" Todeschini. This replica is based on the French find from Colletière à Charavines. 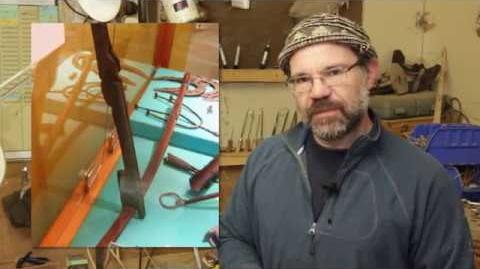