This article describes design aspects of a simple nut and trigger lock commonly seen on medieval crossbows. For practical instructions on how to make the nut, refer to this article.

Parts and the operating principle[]

The simple nut and trigger lock was the very common in the Medieval times. The lock consists of four parts:

Although this picture showed an axle going through the nut, in Medieval times the nut was usually held in place by simply fitting tightly into a socket carved into the stock. Sometimes the socket was reinforced with horn or steel. If a metal nut is used, a metal (or metal-plated) socket and oil will reduce friction greatly, reducing chances of misfire. Especially in late-medieval models the nut may have had a hole in the center to receive a bolt or a pair of screws. Alternatively cord was passed through the hole and bound to the underside of the stock. These techniques ensured that the nut did not fall off the socket; even in case of steel bolts the socket bore the load of the bowstring.

The nut was often made of horn or antler, in which case the place where trigger contacts the nut (bottom right) was reinforced with steel. The nut can also be made of steel or other durable metal, in which case no extra reinforcement is necessary. The nut has a slot at the top through which the bolt is pushed against the string. The slot is shown clearly here:

The parts of the nut left at the sides are called the nut's fingers. They serve the same purpose as an archer's fingers.

The trigger is forged from steel. An axle goes through it near the front, which gives the trigger considerable leverage. The stock is carved so that the trigger can rotate freely around the axle. When the trigger is pulled, it's front end moves downwards until it slips of the catch in the nut. At this point the pressure exerted by the bowstring rotates the nut and sends the bolt speeding forward. The slight outward curvature of the trigger's long part helps keep the balance point of the trigger as far away from the axle as possible when the crossbow is in upright position. This is important in order to keep pressure on the nut while the crossbow is being cocked with the stirrup. A simple flat spring pushing the trigger away from the stock can be used to achieve the same goal more reliably.

There are a few key things to remember when making a nut and trigger lock. Most importantly the nut and the trigger have to be aligned correctly:

If the nut and trigger are aligned as shown on the right, pulling the trigger actually pulls the string backwards. This of course makes the trigger pull very stiff, which translates to poor accuracy. Correct alignment (on the left) actually does the reverse by letting the string move slightly forward when the trigger is pulled. This means the trigger pull is much more comfortable. That said, taking this correct approach too far means the crossbow may shoot spontaneously, making it very dangerous and prone to breakage.

In addition to aligning the nut and trigger properly, all surfaces touching the string - especially the corners of the "fingers" - have to be rounded and smooth. It also makes sense to make them relatively wide (5mm+) to avoid stressing the string unnecessarily. Also make sure the slot between the fingers is wide enough to accommodate the butt-end of the bolt.

Placing the nut sufficiently deep into the stock is also important:

Make sure the butt of the bolt does not rest on the nut (as on the right). Otherwise the butt-end of the bolt can move freely sideways, causing bolt flight to be unpredictable at best. The forward end is of course kept from moving sideways by the bolt groove. This is probably less of an issue if the bolt fits tightly between the fingers of the nut - unlike in the picture above.

There are several reasons for a nut and trigger lock misfires:

If several of these are combined (as in one of my crossbows), there's a high chance of misfire. Using bolts with a large diameter butt-end helps, but does not solve the underlying problem.

Misfires can be effectively removed with a couple of adjustment to the nut finger placement: 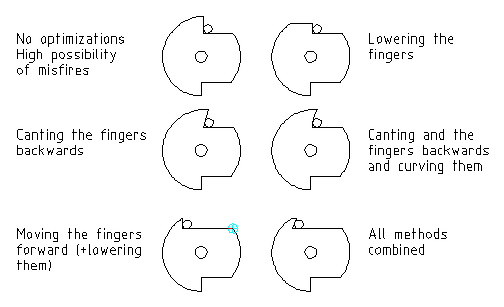 In general, a nut rotating around an axle is less prone to these issues, as there's inherently very little friction involved.

In this type of lock the contact surfaces of the nut and the trigger are under considerable stress, which can quickly cause them to wear out. The problem is magnified if:

As an extreme example, take look at this photo: 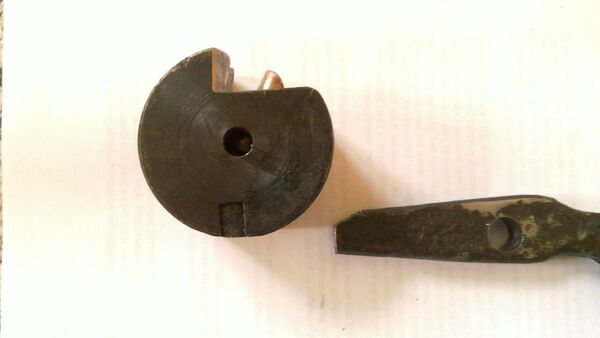